July marks Sarcoma Awareness Month. Known as the ‘Forgotten Cancer’ Sarcoma awareness is symbolized by the Yellow Ribbon – similar to how the Pink Ribbon is used for Breast Cancer Awareness.

What is sarcoma and why is it the Forgotten Cancer?

Sarcoma is known as the ‘Forgotten’ or ‘Lonely’ cancer as it is one of the rarest forms – making up less than 1% of cancer diagnoses across all age groups. While this does seem low – in the UK, around 15 people per day are diagnosed with sarcoma.

Although sarcoma is rare, it is potentially fatal, making it one of the most life-threatening forms of cancer. Sarcoma affects the soft tissues in the body such as muscles, fat, blood vessels, nerves, and even bones and cartilage. It is caused by mutations in the cells’ DNA that lead to tumors.

It is notoriously hard to spot. The condition is usually advanced before patients begin to feel any side effects.

Sarcoma is a complicated form of cancer, there are several sub-categories of Sarcoma that all have their treatment pathways. The most common subcategories of sarcoma are:

Some types of sarcoma are more prevalent in some parts of the body than others. Leiomyosarcomas commonly affect the abdomen, whereas Undifferentiated Pleomorphic Sarcoma is often found in the legs. 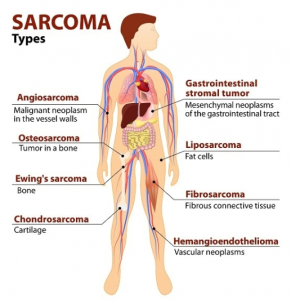 The Yellow Ribbon has been used to represent many important issues over the years, like suicide awareness, bone cancer and even to show support for troops. However, is you spot a Yellow Ribbon in July, it is being used to symbolize Sarcoma Awareness.